Your professional for jumping, dressage, sport and equitation horses.

This is a small collection of horses we have had. We also have a lot of clients who only want to have pleasure with their horses. Sometimes they only do small classes or just have fun to ride.

winner of the championship of the young horses in Warendorf; later the horse participated in the Japanese Olympic team a couple of years ago

sold to the USA; as "Schnaps" very successful in big prices with Margie Goldstein-Engle

sold to the USA; when starting for the first time as a hunter in a hunter class, the horse turned to be the winner of it class

Glenn was placed two times in 2nd place in national courses on the Hamburger Derby place with Hans-Jürgen Wiebusch; later Glenn was the winner in a 1,30m course with the dressage rider Jan-Andreas Viebrock; afterwards Glenn was very successful in higher tournaments with Andreas Viebrock

sold as a colt;3rd place in the Grand Prix of Verden in the year 2001 with Jörg Peper; afterwards the horse was sold to Francois Kasselmann

one of the best amteur horses; winner of several national 1,50 classes and even placed in international classes with Andreas Viebrock

sold to Mexico; "Werner M" was placed 3rd in the Mexican championships with a Mexican amateur rider

Very succesful with Lars Nieberg in the World Cup Final in Las Vegas 2005.

In the beginning of the year 2005 sold to the USA. The mare is now successful with Ann Kursinski.

the mare participated at the championships for young horses in Warendorf; then we sold her to Mexico; when "Alicia" was 7-years-old she was 2nd in her group of age at the Mexican championships; now she is doing very good with a girl in high jumping competitionsn 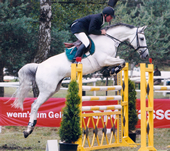 When the mare was 6 years old she was qualified for the Championship of young horses in Warendorf. In national Competitions first succesful with Hans-Jürgen Wiebusch and now the mare competitions with Lars Nieberg and with Imke Harms. Winner of the German Ladies Championchips in Verden 2005. Later the mare was sold tot he United States where Rulanda is very successful with her rider Carolyn Kelly. 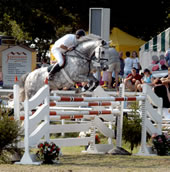 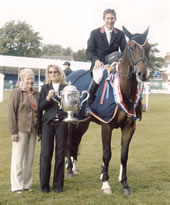 Cobold is own breeding. The horse was successful in prospect classes and as a 6-year-old the horse participated in the championships of young horses in Warendorf. Afterwards the horse was sold to Ireland. Being 7-years-old, the horse became champion in his class with Clam McMahon in Dublin on the horseshow. 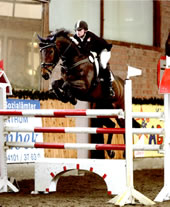 The horse was already successful in jumpoing classes up to 1,40m with Hans-Jürgen Wiebusch . Then the mare was sold to a young lady in Hamburgand also is very successful with her. 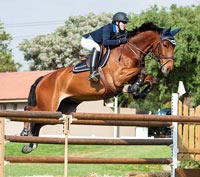 As a 5yo the horse had been successful in prospect classes and was then sold to a very good amateur rider in South Africa. The horse was the winner of the World Cup qualifications in 2015 and 2016 with Lisa Williams. Campbell ended up in 2nd place in the South African Derby in Kylami in 2016. In 2018 Participant of the World Equestrian Games in Tryon,USA and 3rd place in the Grand Pix at the Munich Indoor with his rider Lisa Williams,2020 the most successful horse and rider in South Africa. 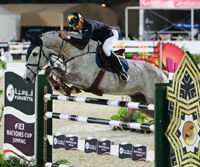 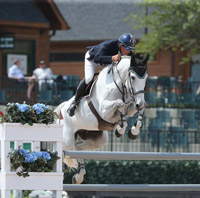 As a 4yo successful in prospect classes,then sold to Holger Hetzel and meanwhile very successful in the USA in 1,55m classes, national and international placings and wins.

As a 7yo placed in the final of the World championships of Young horses in Lanaken. Then the mare was sold to Switzerland is successful with a girl.

As an 8yo winner in the 1,40 class and then sold to England. Campus under the saddle of Emma Stoker with many national and international placings in 1,50m classes. 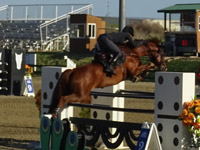 As 4yo placed in prospect classes and then sold to Canada. Meanwhile Tamie Phillips is successfully showing the mare, many placings in 1,50 m classes, as for example 2nd place in the Grand Prix on HITS Thermal Dersert Horse Park. 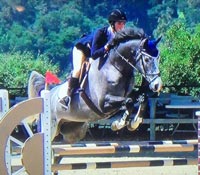 Placings in classes of his age and style classes with a girl in the USA.

As a 6yo successful in prospect classes and then sold to England where the horse was Champion of 7yo horses in Bolesworth under the saddle of Emma Stoker in 2015. Meanwhile the horse is successfully showing in Canada. 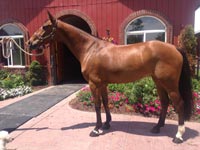 As a 5yo successful in prospect classes, then sold to Arizona/USA and always successfully doing in classes of her age group with a woman. 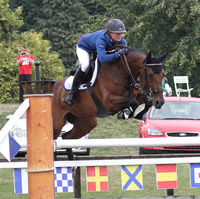 As a 5yo succesful in prospect classes and then sold to England. In 2015 the horse won some 6/7years class and many placings with her rider. 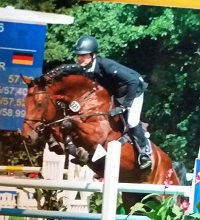 As 6- and 7 year old successful with Harm Wiebusch in S***, now successful in international classes with Ricardo Pesani/Italien, double clear in Barcelona/Nations Cup 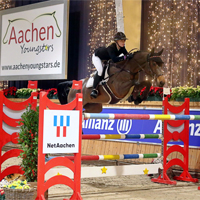 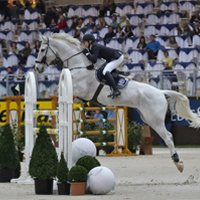 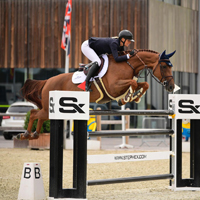 after the first show with Harm Wiebusch, the horse was sold to Paul O’Shea who let the horse for more training and practice with Kristin Kirchner and Christian Straub for one year. Meanwhile the horse is international succesful with Paul O‘Shea 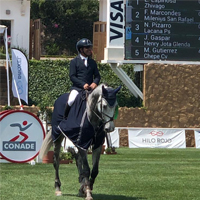 sold to Mexico and succesful there, with Luis Esoinosa/Gabriel Rihan winner of the 6-year-old in 2019, now is sold to the USA 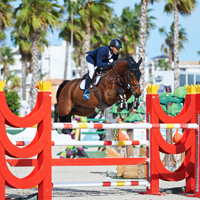 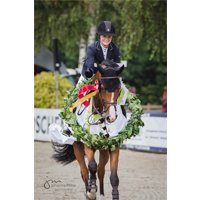